Super Bowl 51: A lesson in endurance 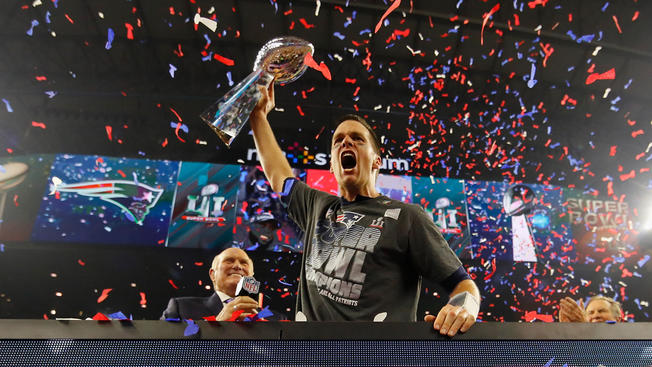 So our New England Patriots football team have won the Super Bowl — again.  For the fifth time. This team and its quarterback have broken records and performed almost heroically in a sport that has been taking a beating in the media over the last couple years.

But at the end of the day, we Americans love our football and in New England, we LOVE our Patriots and our quarterback, Tom Brady. And even though many of us, like myself, have been fans before it was cool to be a Pats fan, for the last decade and a half we have had a very good reason to faithfully trust that our Patriots will win, and win big.  They have been to 7 Super Bowls and won 5 of those matches.  So in 16 years, Tom Brady has led his team to almost half of the Super Bowls and they have won 71% of the time.

Let’s look at just a few of the records and stats from the game last Sunday:

So am I blogging about the Patriots because I’m a huge fan? Not completely, because there are far more capable writers who could do a much better job breaking down all of the plays, all of the stats and all of the reasons why the Patriots, Tom Brady and Coach Bill Belichick are the best ever. But the day after the stupendous win,  I woke up and was in awe about this game and knew I had t write about it because it impacted me.

But first, I need to confess something: For the first three quarters of the game, I was disgusted with my team and with the coaching staff.  My husband and I were yelling at the TV, ranting about how our team didn’t seem to show up to play and how they were being schooled by the Atlanta Falcons. I even posted on Facebook during the game how disappointed I was in what was happening.  I was listening to the announcers state that no team has EVER come back from more than a 10 point deficit as I’m watching our team struggle under a deficit that mounted to 28 points.  It looked impossible so I went to bed.  I put laundry away, I washed my face and brushed my teeth and got in bed.  My husband and I had the game on, but were switching in between that and one of police shows that we like.  And every time we turned back to the game,it was frustrating. Then I started to drift off to sleep —until I heard my husband get excited and yell about a great play.  He said, “Honey are you watching this?!”

So I woke up to see the amazing, awe-inspiring comeback of the New England Patriots over the Atlanta Falcons.  No one, and I mean no one, expected that they could come back to win this late in the 4th quarter, and they did it in record style.

So the next morning, when I woke up and realized that what happened wasn’t a dream, I began to process what I saw. I began to realize that there are great lessons to be learned from how the Patriots won that game. Here are just two:

Paul said, in Philippians 3:13-19 13 “Brothers, I do not consider myself yet to have laid hold of it. But one thing I do: Forgetting what is behind and straining toward what is ahead, 14 I press on toward the goal to win the prize of God’s heavenly calling in Christ Jesus. 15 All of us who are mature should embrace this point of view.”

Paul is teaching us to have the same mindset that Tom Brady displays on the football field, except that our mindset is to impact how we run the race that God has set before us. We should never quit, never let up, keep pressing forward and instill the 6 second rule – we have 6 seconds to get over disappointment in seemingly unanswered prayer, and frustration at ourselves for where we blew it.  And then it’s time to “drive on” and keep pressing for a win.  If we never quit, we will see the victory that we are seeking.

Many years ago, I read an illustration by a great man of faith named Watchman Nee.  He described what it’s like to pray about something big for a long time and fight discouragement when it doesn’t appear that prayer is working.  He said that he imagines his prayer request like a big scale in the heavenly realm.  On one side is the weight of the opposition that we are combating in prayer.  When we pray, we are dropping small pieces of gold on the other side.  But we can’t see how big the weight is on the other side.  And we can’t see how many pieces of gold are going to be needed to make the scale start to move. And because we don’t know how many pieces of gold will be needed to finally tip that scale in our favor, we need to just keep putting pieces on gold on the scale in prayer.  There is opposition in the heavenlies, like an opposing team that wants to push us back and take us out of the game, but pressing on in faith and never quitting will bring us the victory that we desire.  If the seemingly impossible can be done on a football field by mortal, fallible human beings, how much more can we expect when we are putting our faith in an infallible, Almighty God?

Revelation 2 says it this way: 7 “Every person who has ears should listen to what the Spirit says to the churches. To those who win the victory I will give the right to eat the fruit from the tree of life, which is in the garden of God.” (underline mine)

The word for “win the victory” is also translated, “overcome”, “prevail”, or “endure”.  There is a battle to be fought. There is opposition to be overcome. But if we are faithful and endure, if we shake off the setbacks and keep pressing forward, we will win!

On the other hand, if we never get in the game, we will never experience what it’s like to win.  It’s true that if we sit on the sidelines, we will never get hit, never get pushed back, never have to pull ourselves together emotionally and physically, and never get discouraged.  But we will also never experience what it feels like to be a winner.  People who get sidelined by discouragement (losing their courage) will never win.  They will never know what it’s like to hold up a trophy after an excruciating battle and with overwhelming emotion and give thanks to God for all He has done.  Jesus never promised us a life without opposition or trials.  He never promised us a life where every victory comes easily and quickly.  He never said that we wouldn’t experience setbacks.  What he promised was that if we endure to the end, we will receive our prize. He is our prize.  Life eternal and full of glory is the prize worth pursuing with everything that is in us.

If so, you’re not alone.  We all feel that way – often! Even those who press through to victory feel those feelings.  The only difference is that they don’t yield to those emotions.  They don’t allow them to have all the airtime in their heads.  There comes a day when we have to get sick and tired of being sick and tired to the point that we take authority over our thoughts and declare war on fear, shame and discouragement. Those thoughts are lies that will vanish like the smoke left over after the boom of fireworks.  If we stay faithful to believe that God cannot lie and that we will win if we do not give up, then pretty soon the sky will clear and the smoke and fumes will dissipate.  We will be full of faith again.  Never, never, never quit. You will come through to the other side with a testimony of God’s faithfulness just as every person in the Bible did who endured to the end.

If  you like this blog, I would love to hear from you! You can leave a comment at the bottom of this page and sign up on the Home Page to receive all of my blog posts in your email inbox.  That way, you won’t miss a post and you can read them at a convenient time for you!